The use of drones to carry out inspections has taken off - both literally and figuratively - in manufacturing, real estate, infrastructure, the chemical industry and onshore and offshore operations. Witteveen+Bos uses image and sensor data from drone inspections, in combination with smart algorithms, to generate predictive maintenance models.

Traditional inspections of civil engineering structures involve aerial work platforms and other heavy machinery which cause problems and delays for both road and waterway traffic. Lanes need to be closed, which on busy thoroughfares is no longer a viable option. Shipping can also be affected if the underside of a bridge needs to be inspected. Artificial intelligence and machine learning have been used, for example, during inspection of the civil engineering structures, tunnels and bridges, and roads and wharfs of the Maasvlakte’s terminals. While the drone flies overhead, the traffic and work taking place on the ground and water can go on undisturbed.

Take, for example, the Algera Bridge across the Hollandsche IJssel. This bridge, located at Krimpen aan den Ijssel, is part of the N210 and connects the Krimpenerwaard with Capelle and Rotterdam. It is one of the most congested sections of road in the Netherlands. When Witteveen+Bos was instructed by Rijkswaterstaat (Directorate-General of Public Works and Water Management) to inspect the condition of the bridge, the guiding principle was that the inspection should cause as little disruption as possible to the traffic and surrounding area. And there was only one way to achieve this: by replacing a traditional inspection with one using a drone.

Working with drones has several advantages, according to Leon Reijmer, project leader at Witteveen+Bos. 'There’s no need for traffic management while inspections are taking place, so there are fewer traffic jams and C02 emissions. The work is safer, and a drone can access places that are virtually inaccessible during a traditional inspection. Also, there’s generally much less impact on the surrounding area, less time is required to carry out the inspection and it’s quicker to organise in terms of the necessary permits.'

Rijkswaterstaat is exploring the possibility of making wider use of drones in inspections of civil engineering structures. An extensive programme has been put together in which various experiments with applications for drones are to be carried out. Arie van Kersen, technical adviser at Rijkswaterstaat, has developed an evaluation model in collaboration with colleagues that allows an informed choice to be made for either a traditional inspection or one using a drone. Van Kersen: 'We do this on the basis of several aspects, such as safety, cost, inconvenience, risk, CO2 emissions - and that provides a label for the impact of the inspection. We call it a drone label. You could compare it to an energy label.'

Witteveen+Bos collaborated with DroneQuest during the inspection of the Algera Bridge. 'In two days, we photographed the whole bridge,' says Reijmer. 'We’ve got 40 gigabytes of data which we can convert to a 3D model of the bridge. We’re at the beginning of a move towards completely new inspection techniques. Besides a camera, drones can also be equipped with sensors. Image and sensor data combined with smart algorithms form the basis for predictive maintenance models for civil engineering structures.' Simon Voogd, drone consultant and owner of DroneQuest, adds: 'During a subsequent inspection of the bridge, we can follow the exact same flight plan and compare the new data with the existing data. In this way, we can quickly and efficiently identify any differences.' DroneQuest works with ten certified pilots in order to meet the demand for inspections.

Using an algorithm, the computer model can recognize and highlight the presence of cracks. Zooming in allows the size of a crack to be assessed, after which a decision can be made regarding the measures that need to be taken

'For the inspection of civil engineering structures using drones, collecting data - photos, videos, sensor data - is the first step,' says Arie van Kersen. 'The next step is to analyse that data in a computer model with the help of artificial intelligence and machine learning. Based on this analysis, the model finds, for example, where a bridge is damaged. This could be rust, lime or cracks. The inspector doesn't need to see what the computer sees. Using his expertise and experience, he can focus on the system’s findings, assessing them and, if necessary, correcting them. The inspector takes on a different role. Based on what he observes in the models, he can draw his conclusions and take action. It is necessary, however, for him to verify the results of the AI. The drone is there to assist him, as there are also places where a drone can’t or doesn’t need to be used, such as installation spaces.'

Rijkswaterstaat is stimulating the market for using drones in the inspection of civil engineering structures. Arie van Kersen is one of the driving forces of the drone programme.  Guidelines - one set for civil engineering structures and another for underwater - are currently in development.  With the help of these guidelines, an informed decision can be made on whether or not to use drones for an inspection.

On behalf of Witteveen+Bos, DroneQuest carried out inspections at the Maasvlakte, an industrial area located in the Port of Rotterdam. As part of this, the pavement, asphalt and concrete surfaces at one of the container terminals were tested for rut formation, with the asphalt and concrete also being tested for cracks. Using a very high-resolution camera (100 megapixels), photos which overlap by 80 % were taken from various angles. This allowed a 3D model to be created which reveals rut formation from as little as 3 mm in gradation. During the first inspections, the drone flew at an altitude of 15 and 30 metres. Using an algorithm, the computer model can recognise and highlight the presence of cracks. Zooming in allows the size of a crack to be assessed, after which a decision can be made regarding the measures that need to be taken.

The next assignment for DroneQuest is to inspect the asphalt surface of the wharf. To achieve this, a drone will fly above the wharf’s cranes, at an altitude of 120 metres, making use of a 300 mm lens. By flying at this altitude, the operations on the ground won’t be disrupted and an optimal picture of the surface underneath the cranes can be obtained. About 30,000 photos will be taken for this purpose. Witteveen+Bos is aiming to have the data generated by this automatically processed, so that it can be used to determine appropriate maintenance measures. In the meantime, a pilot has also started inspecting the wharf’s cranes themselves and is using an algorithm to investigate for cracks and rust. 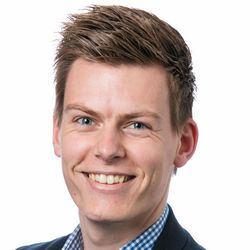