Proud of our roots

From 1924 to 1945, Willem Witteveen had worked in Rotterdam at different times as Head of Urban Expansion and Buildings, City Architect, Director of Urban Development, Director of the Municipal Engineering Department and Director of the Rotterdam City Planning Advisory Office. After qualifying as a civil engineer at the Delft University of Technology, Mr. Bos spent four years working at the Amsterdam Public Works Department and six years at the municipality of Enschede. He produced a plan for Enschede’s sewer system and what at the time was the largest sewage treatment works in the Netherlands.

Coincidence and chemistry played a part in the first meeting between these two gentlemen. In late 1945, a mutual acquaintance advised Witteveen he should meet with Bos. Bos would later call it an incredible story: ‘Half a day after this advice there was a meeting between the famous urban planner and a completely unknown civil engineer 17 years his junior. After talking after lunch for less than an hour, the decision was taken to enter into a partnership to establish an engineering firm for urban development and public works’.

The partnership contract was penned on just one sheet of A4 paper and survived until 1 January 1958 when Witteveen retired. Their successful association was built upon trust and reliability. And it still is.

Bos remained active in our agency until 1976. He was a man with a clear mission: ‘Our work is aimed at enabling people to live safely’. In addition, he felt he was a proper engineer ‘that works in the area of tension between two responsibilities – the responsibility towards the client and the responsibility towards society that we are a part of’. Engineering was his life, and the way in which he carried out his profession is still a source of inspiration for many of us.

The company’s first assignment was won through Witteveen: the design for the Prins Bernhard locks for the new port in the city of Deventer. Their office was established at the plush villa owned by the mother of their new associate Frits Meijer 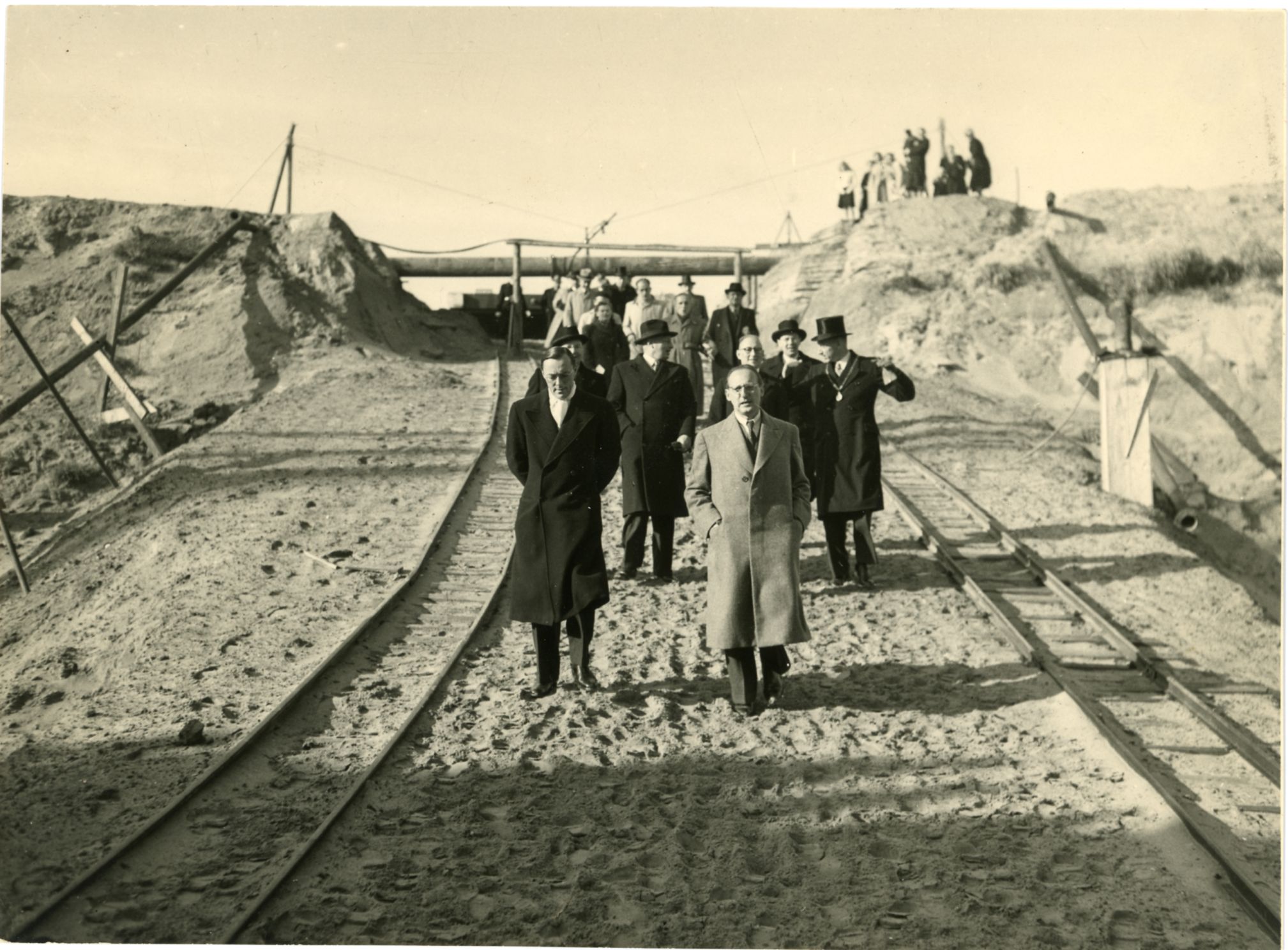 The first years bore all the hallmarks of the post-war pioneering phase. Drawings were made on drawing tables and we used slide rules for calculations. Supervisors travelled to project sites by bicycle. It was a phase in which the work was awarded to the expert engineers and consultants Witteveen and Bos for the simple reason that they were known to be good at their job.  In the years that followed, we were swept along with the progress taking place in the Netherlands and experienced a phase of strong growth. Witteveen and Bos grasped the opportunities for other types of projects that presented themselves with both hands and started working on sewage treatment plants, among other things.

Societal developments were reflected within the organisation. The phase of democratisation in the 1960s resulted in the first Contact Council (Kontaktraad) which later became the Works Council. In projects, miscommunication sometimes arose between project leaders and draughtsmen (inside) and the supervisors (outside). To resolve this, the Technical Contact Council (Technisch Kontakt Beraad, TKB) was established: a fixed meeting point, twice a year, to improve contacts, share professional knowledge and discuss organisational developments. Even today, the TKB is still a household name and a very well-attended internal networking event.

The early 1980s were economically difficult times and competition intensified. During this period, we grew from 200 to 300 employees. Our internal organisation was professionalised through the new PMC structure with three sectors: Environment, Infrastructure and Buildings, devolving entrepreneurship to lower organisational levels.

In 1992, the Witteveen+Bos partnership was converted into a company with all the shares held by its employees. The subsequent period of economic growth offered great opportunities, including large infrastructural projects such as Amsterdam’s North/South metro line. This growth enabled our company to step up its professionalisation drive. Our first company code and a completely rewritten Quality Manual were introduced.

The strong globalization of the past decade triggered a phase of rapid internationalization for Witteveen+Bos. We won contracts in Kazakhstan and opened three offices there. We also opened new offices in places including Antwerp (2009), Singapore (2014), Dubai (2014), London (2015) and Ghana (2016). In May 2015, Belgian consultancy firm MAVA joined Witteveen+Bos.

Those who know their past are prepared for the future

Strong foundation in past experience

Witteveen+Bos has now grown into a global network encompassing some 1,100 experts and operating in 11 countries. Based on a strong foundation, our DNA, our strategy and corporate objectives, we aim to continue growing as a global integrated company with a sustainable and innovative profile. In the coming decades, we aspire to be a committed and interesting employer, contractor and project partner in resolving the societal challenges of the future.