In August 2021, Estonia’s only dynamic, moveable pedestrian bridge, located in Tallinn’s Old City Harbour, was opened for use. Witteveen+Bos was responsible for developing both the preliminary and the detailed designs. The Dutch-Latvian consortium comprising Witteveen+Bos and ECHO Urban Design (formerly Plein06) won an international design contest organised by the Port of Tallinn in 2017.

Our client, the Port of Tallinn, wanted to make it more convenient for pedestrians to move between two terminals, and also create an attractive structure which added value to the surrounding urban space. The Old City Harbour is an important area for recreation, too.

The initial design for the bridge, called New Balance 100, was intended to form an architectural and cultural milestone for Estonia. With its aesthetic design and innovative solutions, the bridge was to become a landmark in the harbour area and the perfect symbol to celebrate the 100th anniversary of Estonia’s Declaration of Independence in 1918.

Initially, the New Balance 100 design consisted of a bascule bridge with two decks, whose counterweight components rolled backwards. It combined an aesthetically pleasing look with an innovative, technical balancing solution. The water reflected the skyline of Tallinn's city centre, framed by the symmetrical parts of the bridge. When the bridge ‘opened its arms’, it created an iconic image that ‘embraced’ residents and pedestrians. In both its open and closed positions, the bridge was to constitute a remarkable sight.

Unfortunately, the submitted construction tenders were deemed to be too expensive and the client requested that possibilities to optimise construction and eliminate complications be sought, while preserving the bridge’s appearance. In the summer and autumn of 2019, in collaboration with the client, the consortium revised the original design to ensure that the bridge could be constructed within the allocated budget.

The decision was made to change the kinematic scheme to a single-deck swing bridge. This meant that, instead of two cellars, a central pier was built, and also that only one mechanism was required, instead of two. The visual appearance of the bridge retains the originally envisioned style, and the bridge is still operated remotely from the vessel traffic centre. 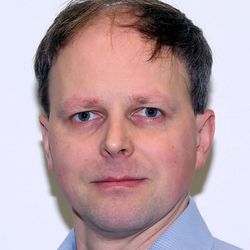