Smart Thermal Grid as solution in the energy transition

Using smart technology to connect heat pump installations in houses and buildings to underground thermal energy storage systems and local energy sources – this is the essence of the Smart Thermal Grid (STG), designed by Witteveen+Bos and its partners.

Local UTES – underground thermal energy storage – systems form the basis of this innovative energy network for supplying heat and cooling to buildings. In winter, cold is stored for cooling in summer, while the summer heat is used as a source of heating during winter.

The system makes it possible to control energy supply and demand between the various objects (houses, offices, etc.) in the network. ‘The surplus from one object is used to meet the demand elsewhere in the network,’ explains Taco Postma, energy transition specialist at Witteveen+Bos. ‘Making the best possible use of the area’s energy surpluses and deficits is one of the distinguishing features of the Smart Thermal Grid.’

The STG also creates considerably reduced carbon emissions compared to traditional UTES systems. The Smart Thermal Grid at the Floriade site in Almere is a good example: compared to a conventional set-up, this STG produces just under 25 % fewer emissions.

This reduction is due to the system using less electricity; and with the electricity supply in the Netherlands rapidly becoming more sustainable, STGs will be almost climate-neutral in the future.

Smart Thermal Grids can also play an important role in resolving grid congestion. Increasingly, electricity generated by solar panels and fed back into the network is causing overloads. This overloading can be reduced by using an STG to convert electricity from solar panels into heat.

Self-consumption of electricity from solar panels spares the electricity grid; and by making smart agreements with their energy suppliers, residents can also save on energy costs

‘For example, you could heat the water used for showers in hotels or houses with energy from solar panels located on those premises. This would mean heat pumps could produce hot water 100 % sustainably. Self-consumption of electricity from solar panels spares the electricity grid; and by making smart agreements with their energy suppliers, residents can also save on energy costs.’

Heat extracted from surface water and waste heat from industry and data centres can also be used in an STG. Witteveen+Bos has the expertise in-house to design customised Smart Thermal Grids for residential areas or industrial zones, tailored to both the (future) requirements and the available or anticipated energy sources.

‘For a project like this to succeed, mutual trust and an overarching vision of what possibilities an area offers is needed,’ emphasises Taco Postma. Energy is one of the most important concerns for areas in transition, but other pressing issues such as climate adaptation, public space and heat stress also need to be considered in this kind of project.

‘It’s essential, right from the start, to create the necessary preconditions for a Smart Thermal Grid. In both redevelopment and area development, we can act as chain directors to ensure that STGs provide sustainable added value to users, project developers and municipalities.’ 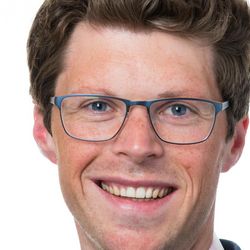