Air quality and emissions are becoming increasingly important in the environmental sector. Both have long been underexposed because of their transience. Today's emissions will soon become part of the larger atmosphere, and we will never know that we have been exposed to an odourless substance until its long-term effects are visible. But how can we point the finger at people or companies when even air experts sometimes fail to fundamentally address emission problems? This led us to the ISAIRA (In-Situ Air Analyses) idea.

By carrying out air-related projects for industrial customers and governments, we notice that even as an air expert we sometimes miss insight to be able to fundamentally address the problems. The idea to expand the EnISSA technique, an innovative measuring technique in the soil, to an innovative technique for carrying out air measurements started to mature.

The danger of letting something ripen too long is that it rots. The art of innovation is to bring out an idea on time. This is one of the things I remembered from the boot camp sessions. Months of innovation in a basement is a loss of time when you find out on the moment of truth that the innovation is going in the wrong direction or has already been surpassed by other initiatives. To avoid this, we needed a motivated team that was given the necessary space, both in time and financially, and a 'stimulating force'. Thanks to the Plus+ Innovation programme, these needs were perfectly met.

The influence of the innovation programme was already apparent from the start, when three profiles had to be filled in: 'the flame', 'the builder' and 'the rocket'. Everyone immediately knew his responsibilities. With the necessary support from experts, the team went from one boot camp session to another and from deadline to deadline. By brainstorming about the business plan and constantly pitching the idea, the innovation fleshed out over time. Until the very last moment, there was tinkering in the basement and talking to potential customers. After six months, we were suddenly in the final alongside nine other teams. We were very satisfied with the work, but  knew very well that the hardest part was yet to come. Putting the idea on the market, executing projects and meeting expectations time and again. It's clear that we hope and believe that the end of the innovation programme does not mean the end of ISAIRA.

Fortunately, we have experienced that, in addition to the passionate supervisors of the innovation programme, there are also many colleagues who are very passionate about their profession and open to innovations. We seize every opportunity that is offered to us with both hands and try to learn from every project by using those things that can take ISAIRA to a higher level. 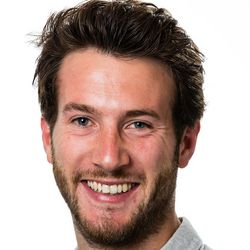