Energy islands: the next step for offshore wind growth

Successful cost reduction of offshore wind is all about economies of scale: larger turbines, bigger wind farms, thicker cables and bigger converter platforms. Scaling up the current 700 MW AC platform to a 2 GW DC platform is anticipated by 2030, while, in the 2030s, energy islands are set to be the next step in achieving offshore wind growth.

An island is cheaper than several platforms

Borselle and Hollandse Kust wind farms are not far from the shore. They have been or are being built based on the 700 MW AC platform standardised by TenneT. Conversion to direct current is more cost-effective for wind farms further offshore. DC cables suffer fewer transmission losses and are cheaper per kilometre, although the converter platform is more expensive. Moreover, over long distances AC cables also require an intermediate platform for reactive power compensation.

In designing the new DC platform standard, TenneT is scaling up to 2 GW. IJmuiden Ver will be the first wind farm to use these HVDC platforms. As only one platform instead of the usual three is needed to connect a 2 GW wind farm, much less steel is required to build the platforms and fewer cables need to be laid, resulting in substantial savings. However, to develop a large wind farm cluster of 10 GW far offshore, we will still need five HVDC platforms.

A cheaper connection concept is to build an ‘energy hub’ or energy island in the heart of this wind farm cluster, with direct wind turbine connections to and converters on the island. This saves five steel platforms. However, strong concrete sea defence blocks will be needed to protect a sand island in the middle of the North Sea from extreme waves.

An energy island is estimated to be a cheaper alternative than several separate platforms for various planned 4 or 6 GW wind farms (e.g. IJmuiden Ver and the wind farms investigated in VAWOZ for an additional 10 GW by 2030). However, these islands are not anticipated to be achievable before 2030. After all, no similar island has been constructed before and determining the environmental impact, arranging permit procedures and, of course, the construction itself all take time. The large 8-10 GW capacity of search areas 6 and 7 means both areas are expected to be very attractive for energy island development after 2030.

The Esbjerg Declaration, signed during the North Sea Summit in Esbjerg in May 2022, commits Denmark, Germany, Belgium and the Netherlands to building several North Sea energy islands. The countries are aiming for more intensive collaboration for efficient offshore power integration in the energy system.

Denmark has now decided to construct an energy island, which it expects to realise by 2033. The 3 GW capacity island will have a cable connection to shore in Denmark and also envisages connections to a yet-to-be-developed Belgian island. The Danes appear to have opted for a caisson island rather than a sand island, which involves sinking large concrete boxes at the desired location.

The Hub & Spoke concept can offer higher returns. Hub & Spoke entails an energy island (hub) being connected with cables (spokes) to several countries or to other energy islands. The generated wind power is transported to the highest bidder(s); the country(ies) with the greatest need for sustainable electricity at that time. The cables are also interconnectors between countries, enabling countries to trade power if there is not enough wind. Similarly, two wind farms with an HVDC platform can also be interconnected as a ‘wind connector’, but in this case the hub has only two spokes.

One of the configurations being investigated by the Netherlands and Denmark is connecting islands in Denmark and the Netherlands, combined with a connection from the Dutch hub/island to the UK and a connection from the Danish island to Norway. This network will enable excess wind energy to be stored in hydropower plants in Norway, which will eventually be converted into pumped storage hydropower plants. With respect to the UK, it is often windy there when there is less wind on this side of the North Sea and vice versa. Connecting several energy islands and different countries creates a meshed offshore grid that can better balance supply and demand between the North Sea countries. However, there are still questions as to how such an offshore electricity market will operate. One of the ideas is for offshore hubs to each offer a separate bidding zone.

Illustration of the Hub & Spoke concept by the North Sea Wind Power Hub consortium (NSWPH). The hubs are connected to various countries and potentially also with each other via electricity cables (yellow) and hydrogen pipelines (blue). (Illustration: NSWPH)

Once the decision has been taken to build an island, during the design phase the island can be made several hectares larger for cost-effective accommodation of additional functions. This could include constructing a harbour on the island for converter station maintenance in addition to a helicopter platform. The island can in that case also function as a base for maintaining neighbouring wind farms as well as for storing spare parts. Accommodating maintenance personnel on the island instead of on a Service Operation Vessel (SOV) also delivers advantages in terms of cost and comfort.

If there is sufficient scale, it is cheaper to produce green hydrogen on the island and transport this to shore via a pipeline than transporting all energy to shore via cables combined with shore-based hydrogen production. The maximum cable capacity is currently 2 GW with a 525 kV DC cable, while a medium-sized 36-inch offshore pipeline can transport 4-5 GW of hydrogen and the large 48-inch pipeline has a capacity of 13 GW. It should be noted, however, that the cost advantage disappears if the electrolysis units are located on separate platforms instead of on an island, as this ‘extra space’ is considerably more expensive.

On a hypothetical energy island with 10 GW wind capacity, three cables could be replaced by a 6 GW electrolyser and a medium-sized pipeline, and then two cables could be connected to shore. Depending on the location there may also be an option to reuse existing offshore natural gas pipelines. A hybrid island with both a hydrogen and electricity connection is the most obvious choice; having the flexibility to supply electricity or hydrogen generates higher returns as well as advantages in balancing the energy system. Various other infrastructure-saving functions are conceivable in addition to the logical options mentioned above.

Medium duration energy storage (between 4 and 200 hours) enables a reduction in cable capacity, optimises electrolyser running hours and shifts the supply to peak demand hours. This could be achieved using lithium-ion batteries or flow batteries on the island or, in theory, using a pumped storage system (inspired by Plan Lievense).

The feasibility of producing shipping fuels on an island could also be investigated, as well as the option to realise an offshore filling station for vessels. Another ‘out of the box’ idea is to realise blue hydrogen production on the island, whereby natural gas is extracted from an adjacent field, with CO2 then being stored immediately underground offshore.

Innovations for even more scale advantages

Wind farms can be connected directly to the island up to a distance of 30 km using 66 kV so-called intra-array AC cables from the wind turbines. Interim AC platforms are needed for connections at greater distances, which reduces the cost advantages of the island.

Following a previous switch from 33 to 66 kV intra-array cables, the Dutch offshore wind sector is preparing to switch to 132 kV intra-array cables, which would allow for direct connections up to 40 km from the island. This would allow more wind capacity to be connected to an island without intermediate AC platforms. A similar increase in scale may also be feasible for the island to shore cables. With the introduction of the 2 GW direct current platform, the switch from 320 kV HVDC to 525 kV HVDC is already being made. Future growth to a 640 kV HVDC based on a 3 GW cable system also seems feasible. TenneT is not likely to develop another standard platform concept for this, but this is certainly conceivable for energy islands.

Compared with multiple platforms, large energy islands offer significant cost savings in accessing offshore wind at great distances from the shore. Using the Hub & Spoke concept also results in increased returns and a more balanced energy system for North Sea countries. Additional cost-saving functions, such as a maintenance harbour and offshore hydrogen production, can be the icing on the cake. The key to successful realisation is good collaboration between the countries and the stakeholders. It is essential that countries switch from optimising just their own energy transition to a collective, efficient and cheap energy transition on a North-West European scale, even if this sometimes includes investments that mainly benefit another country. The Esjberg declaration is a good start.

Emiel van Druten studied mechanical engineering and hydraulic engineering at TU Delft and has been employed as energy transition adviser at Witteveen+Bos since 2017. He modelled the cost-effectiveness of the Hub & Spoke concept for NSPWH. He worked on grid connection costs, future stability and system integration aspects within the Exploration of Offshore Wind Energy Landing (VAWOZ 2030) impact analysis. For the past year, Druten has been undertaking part-time PhD research at TU Eindhoven. He is researching system integration including via offshore wind and coastal industry sector connections. 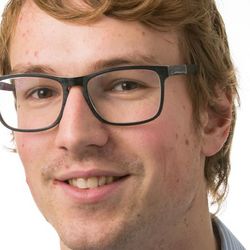